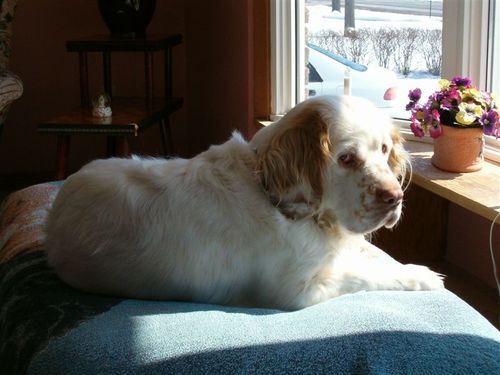 We would like to introduce you to Delta. Delta encompasses everything that one would look for in a canine companion. She is kind and loyal, patient and loving, sweet as can be! Delta is a Clumber Spaniel. A breed many people are not familiar with, the Clumber Spaniel is often underrated (or just unheard of!), but they make wonderful family pets. Delta is particularly fortunate that she has 2 wonderful families, jointly cared for by Charles and Darlene, and Judy and John.

Delta is now 10 years old. She has been very healthy over the years and has rarely had to see the vet for any illness. In fact, Delta even managed to avoid that surgery that causes many pet owners great anxiety – The Spay (Ovariohysterectomy). Feeling certain that an unwanted pregnancy was not a risk for Delta, it was thought that having her spayed was unnecessary.

The staff at Fonthill Animal Hospital first met Delta when her concerned family brought her in to see Dr. Todd because Delta had lost her usual spunk and energy. For a few days now she did not want to eat much, and just wanted to sleep most of the time. Even on her physical examination there did not seem to be too much wrong with Delta, except she had a low fever.

Radiographs (x-rays) were taken, and they quickly revealed that Delta was suffering from a condition called a Pyometra. A Pyometra occurs when bacteria enters the uterus during a heat cycle. The cervix closes at the end of the heat cycle, effectively trapping the bacteria inside the uterus. This bacteria rapidly starts to multiply. The bacteria then causes pus to form in the uterus. If fact, the bacteria can cause so much pus to accumulate that the uterus can become distended more than 10 times its normal size. All the while families have no indication that this is occurring inside their pet’s body. 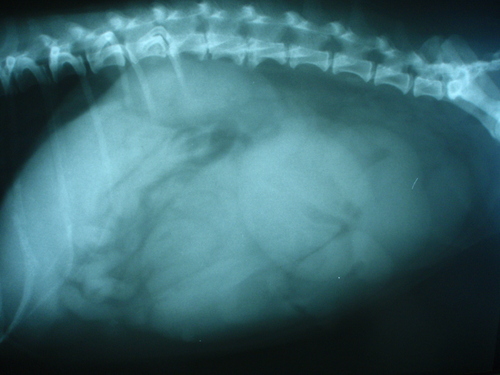 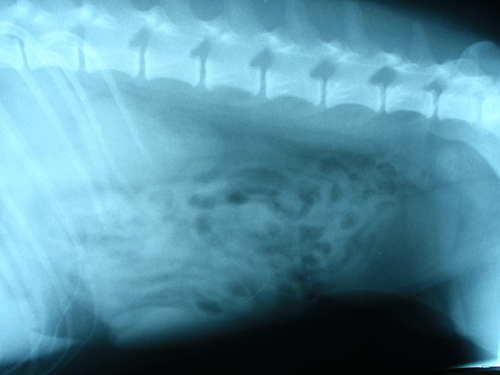 This is a normal radiograph of a dog's abdomen. Not the lack of the large tubular uterus.

The biggest effect though, occurs as the infection starts to manufacture toxins. Delta’s blood stream starts to absorb these toxins and bacteria. Now Delta is starting to become “septic” (a blood infection is forming). She starts to show signs of feeling sick – her energy and appetite decrease – some dogs will also start to drink a lot and urinate often, others may begin to vomit.

Delta was very seriously ill. In fact, the infection was so serious that Delta was at risk of dying. Committed to giving Delta every possible chance at recovery, Delta’s families authorized her to be rushed to emergency surgery to remove her infected uterus and prevent any more toxins from seeping into her blood.

Delta did well during her surgery. Her uterus was severely distended with pus and blood, and weighed almost 2 lbs when removed. Delta was transferred to the Niagara Veterinary Emergency Clinic for continued care overnight while everyone waited anxiously to see if Delta could recover from her blood infection now that her uterus was removed. Everyone was hopeful the next morning when Delta awoke with an appetite for breakfast, which she had not had in a few days. 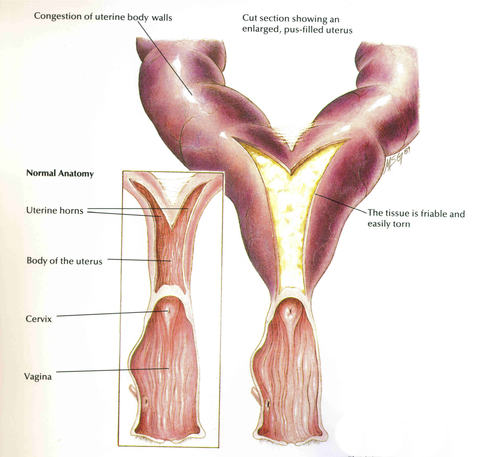 A uterus having a Pyometra. Note how enlarged the uterus is due to being filled with pus. 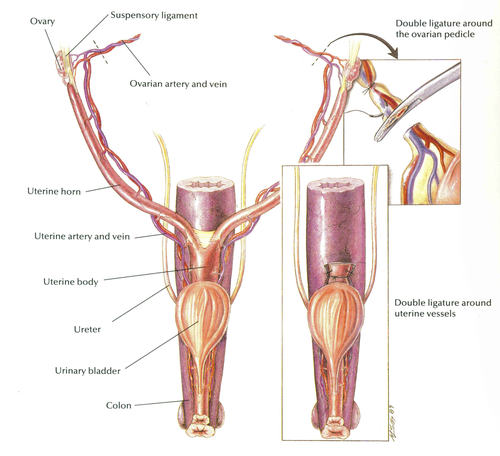 A normal uterus also showing how a dog is "Spayed" (Ovariohysterectomy). Note has small the uterus is compared to the Pyometra uterus. A normal uterus is actually very difficult to see on radiographs, unlike Delta's.

Unfortunately, with heavy hearts, we have to report that Delta succumbed to her blood infection 2 days after surgery, despite the valiant efforts put forth by medical staff and family alike.

Despite their grief Delta’s family generously agreed to allow her story to be featured on our website. Their hope is that her story may convince other families with female dogs or cats, that have not been spayed yet, to have them spayed right away and avoid the same tragic events that occurred with Delta.

The information that Delta’s family did not have early on was that Pyometra is a condition that commonly affects adult, unspayed , dogs and cats of any age. It develops with little warning, and offers only a short window of time between the time the pet starts to feel unwell, and the time the illness becomes too severe to treat. Treatment can be very successful when provided in this short window – but why take that chance? Please have your pets spayed and neutered, and think of Delta when you start feeling anxious about the day of routine surgery.