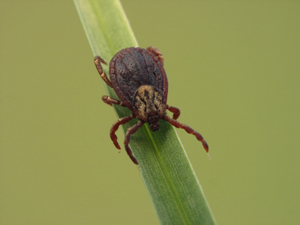 Are you finding tick numbers on the rise? If you are, it’s not just your imagination. Over the last few years the Canadian tick population has been growing, resulting in people having to remove ticks from themselves and their pets more and more often. Although the data does not make any suggestions as to why they are multiplying, we can only hope that this may be a natural cycle similar to what is seen in some other insect populations, and with some luck the populations may diminish again in the next 5-10 years. Until then, here is some information you may find helpful when trying to combat ticks on your pets.

Ticks in General Ticks are most often found in areas of overgrown grass and weeds, and low brush. Most tick species employ an “ambush” technique whereby they climb to the tip of the grass/brush waiting for a potential new “host” to walk by, as soon as contact is made, the tick releases the vegetation and jumps aboard! Some tick species mate before the ambush and then the female jumps onboard looking for a blood meal before laying her eggs. But most species jump aboard looking for a date. They will roam around their new host (person, pet or wild animal) for a day or 2 looking to mate with another tick. After mating they search around for the best spot for a bite to eat and attach themselves for a blood meal. The male tick will eat sparingly, and will not engorge (or swell), but the female settles in for a big meal – after all, she has babies to feed! Some females will swell to 100x their pre-meal size before detaching and dropping off her host up to 10 days later. She will then digest her meal, grow her eggs and look around for a place to lay her eggs – 1000’s of them! Depending on the tick species a female may lay up to 6500 eggs at one time! It can take up to 2 years for those eggs to become adult ticks, but when they do there is an army of them.

Where to look for ticks? On pets ticks favour the ears (both sides of the ear flap or in the opening to the ear canal), the face, lips, armpits and toes. That said – you can find a tick anywhere of the body so look closely. On people ticks often favour areas with hair, or where there are gaps in clothing. If you are hiking in tick country; wear long sleeves and pants, tuck in your shirt and tuck pant legs into socks.

How tough is a tick? When a tick bites their saliva contains a chemical similar to a local anaesthetic. That’s why they can bury their head into the skin and you can’t feel that it’s there. But this feature is helpful when you are removing the tick as you can dig into the skin a bit to ensure you get the tick out AND her head, without your pet feeling too much discomfort. Don’t like to dig? – ask your vet if they have a “Tick Twister”, a handy little tool that looks like a miniature plastic crow bar, you slide it under the tick body and gently rotate popping the tick off. If you have ever tried to kill a tick and wondered why they are so hard to squish, you won’t be surprised to find that a distant evolutionary relative of the tick is the Horseshoe Crab! Hope to wait one out? Think again, a tick can live up to 2 years without taking a single blood meal.

Whose out there? In southwestern Ontario we are fortunate enough to only have to deal with 3 species of ticks, there are a total 9 species in North America. These are our three;

Dermacentor variablis: (The American Dog Tick) This is the most common tick you will encounter. Lighter brown in colour, it has a “double horseshoe” design behind its head when not engorged. It can be found from early spring to late fall but its peak season is May – July.

Ixodes scapularis: (Deer Tick or Black-Legged Tick) This tick is smaller and less common. It is darker brown and can often be identified by a black spot on its back when not engorged. This tick’s peak season is late summer and fall. The young male Ixodes may only be about 2mm in length – he’s small, so look closely! ***This is the tick that can transmit Lyme Disease (see later for more information).

Rhipicephalus sanguineus: (The Brown Dog Tick) This tick is dark brown and has a plain back. The tick is less common as it only feeds from dogs but can be found in areas that dogs frequent. This tick’s claim to fame is that it is the only tick species happy to infest indoor spaces. When the female drops off the dog she will lay eggs in the cracks on floors. The adults like to climb walls and can often be found behind artificial ceilings

.What is the deal with Lyme Disease? Lyme Disease is caused by a bacteria called Borrelia burgdorferi. This bacteria can only be found in some Deer Ticks/Black-legged ticks (Ixodes scapularis). It is transmitted from tick to person/animal while the tick is attached and taking a blood meal. For individuals that contract Lyme Disease the illness initially causes flu-like symptoms (fever, tiredness, loss of appetite), a rash and/or lameness. These symptoms may be mild or severe, they may resolve on their own or require treatment. Some individuals may seemly recover but then 2-5 months later developed other symptoms such as arthritis, chronic heart or nervous system problems or chronic skin changes.

Give me the good news! How worried do you need to be about Lyme Disease? Answer: not too worried – mostly… So let’s crunch the numbers together;

Where to avoid There are pockets of tick populations in Ontario that the Lyme Disease bacteria is found to be more prevalent in the Ixodes tick population (although still fairly low) – these are called “endemic areas”. These areas include: Point Pelee, Rondeau, Long Point, Turkey Point, Prince Edward County, and the 1000 Islands. We could see the Wainfleet Bog added to this list in the future.

How to Control Ticks (1)1. Avoid areas of overgrown grass and brush2. Wear protective clothing – socks, long pants, long sleeves3. Check thoroughly for ticks after potential exposure – removing a tick within 18-24 hours further reduces the risk of infection4. Remove ticks with tweezers or “Tick Twisters”. With tweezers – do not twist the body of the tick, instead grasp the head as close to the head/mouth as possible and pull as close to the skin as possible.5. Wash and disinfect the area with alcohol or antiseptic.6. Use a Tick Prevention Product on your pet**

Notes of Tick Prevention ProductsTicks are very hard to prevent and kill. There is no product available on the market with a 100% efficacy for tick prevention. While using any product you may still see ticks on your pet. There are no products available that can guarantee protection from Lyme Disease. There are an assortment of tick collars and sprays available on the market that can offer some tick protection, however most of these are toxic to cats. Many people dislike them as family members are frequently contacting the sprayed on chemical or the chemical on the pet’s collar.In Canada there are 2 other products available – generally preferred as they are much safer and the technology of their application locks the product into the waxy covering on the skin of your pet preventing it from being transferred onto people’s hands/faces etc

.Advantix (from Bayer) – not to be confused with Advantage or Advantage Multi (also from Bayer). This product helps protect your dog from fleas and ticks (but NOT Heartworm). It is applied to the skin on the back in a spot-on formulation, once a month. It is effective against all 3 common species of ticks in our area, although it is only about 85% effective against the Ixodes scapularis species. This product will kill ticks within 24 hours but if the tick is attached it may remain attached (but dead) until its mouth parts disintegrate and they fall off. **This product can be toxic when applied to cats, or if cats groom, or sleep with, treated dogs.

Revolution (from Pfizer) – Applied in a similar fashion to Advantix, once monthly. This product helps protect your pet from fleas, ticks, Sarcoptes mites (mange) and Heartworm disease. This is the only product that is also safe to use on cats for tick prevention. The down side of Revolution is the product can take up to 3 days to kill the tick depending on how fast the tick is feeding, and Revolution is only effective against the Dermacentor variablis (American Dog Tick) and the Rhipicephalus (brown Dog Tick) species.

Good luck with your Ticks and have a safe summer!

(1) Canadian Guidelines for the Treatment of Parasites in Dogs and Cats .Canadian Parasitology Expert Panel for Companion Animals.Published March 2009.

***A special thanks to the Bayer and Pfizer Companies for assistance in accessing some if the above references.